Hear from our own, Tamra Oman at this event! 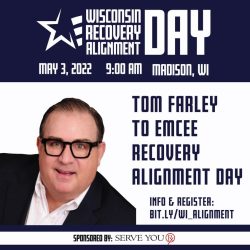 This year’s Rotunda keynotes program will be Emceed by Tom Farley the Community Relations Coordinator in Wisconsin for Rosecrance Health Network.
Thank you to Rosecrance for providing this year’s swag bags!
Register for the Roundtable Lunch and Alignment Day T-Shirt: bit.ly/wi_alignment
About Tom:
Tom Farley grew up in Madison, WI, and graduated from Georgetown University with a degree in Marketing. He began his career in banking and finance, living and working in the New York City area. From 1999 to 2012, he ran The Chris Farley Foundation, a nationally recognized non-profit dedicated to substance abuse prevention. Like his brother, Tom was successful in opening the “eyes and ears” of youth audiences through the powerful and effective use of humor. In 2008 he wrote “The Chris Farley Show”, a New York Times bestselling biography of his late brother, the actor, and comedian Chris Farley. He has been interviewed on The Today Show, Good Morning America, Larry King Live, Fox News and The View. He has also been featured in People Magazine, USA Today, and several national and regional newspapers and publications. Today Tom is a motivational speaker, delivering messages on prevention and recovery, and the use of Improv as a tool to foster better communications in business. Tom lives in Madison, WI.