EAU CLAIRE — One candidate running for Chippewa County sheriff said he’d support legalizing marijuana, while his opponent is leery of such a policy.

The two were part of a candidate forum Monday evening organized by two community groups and held at The Community Table, 320 Putnam St., in Eau Claire.

[But] Marijuana wasn’t the only topic for the sheriff hopefuls running in the Nov. 8 election in their respective counties. With about 25 questions asked by a moderator and the audience, debate topics included proportionally higher incarceration of minorities, inmate voting, peer support programs, mental health, immigration enforcement holds and traffic stops.

As Eau Claire County’s jail population has risen, the potential for adding another pod to house more inmates has been raised and candidates were also asked about that.

Riewestahl said to reverse the increasing number of inmates would take a commitment from more officials in the criminal justice system than just the sheriff. And while he doesn’t personally want to see a jail expansion project, Riewestahl said, “it is on the table.”

If the County Board would decide to fund an expansion of the jail, Henning said he’d support it. But he added that he’d want the addition to include space for services to help inmates with education, alcohol and drug treatment, and to aid in securing housing when they’re released.

Programming offered to jail inmates also came up as a topic for the Chippewa County candidates.

Kowalczyk said the jail has 43 programs — all faith-based and relying much on volunteers. He would like to see evidence-based programs, too, but said the jail lacks the budget and staffing to run those.

Hakes said he believes asking the County Board for funding for evidence-based programming would be worthwhile as it would be intended to reduce recidivism.

Monday’s forum was jointly sponsored by local group JONAH and Expo Wisconsin, a statewide organization working to end discrimination of people who were previously incarcerated and restore their rights.

Dennis Franklin, an EXPO fellow, told his story at the beginning of the forum. 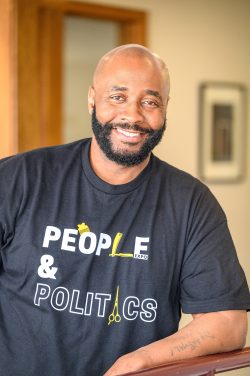 “When I had the opportunity to vote, I never voted,” he said of his younger years.

But after serving time behind bars, getting out, improving his life and becoming a working, taxpaying member of the community, Franklin now wishes he would have the ability to cast a ballot.

“If you have the right to vote, get out and vote,” he urged the audience.