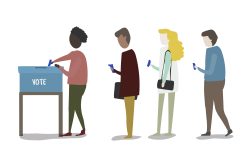 Image by rawpixel.com on Freepik

In the past 25 years, half the states have changed their laws and practices to expand voting access to people with felony convictions. Despite these important reforms, 5.2 million Americans remain disenfranchised, 2.3 percent of the voting age population.

This report is intended to update and expand our previous work on the scope and distribution of felony disenfranchisement in the United States. For the first time, we present estimates of the percentage of the Latinx population disenfranchised due to felony convictions. Although these and other estimates must be interpreted with caution, the numbers presented here represent our best assessment of the state of felony disenfranchisement as of the November 2020 election.

Our key findings include the following: