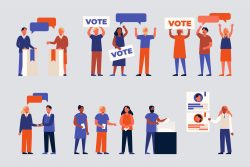 Image by pikisuperstar on Freepik

An estimated 2% of the voting age population in the United States will be ineligible to cast ballots during this year’s midterm elections due to state laws banning people with felony convictions from voting.

That’s according to research released Tuesday by the Sentencing Project, a nonprofit organization that advocates for restoration of voting rights for people with prior felony convictions.

“This report makes it clear that millions of our citizens will remain voiceless in the upcoming midterms,” Amy Fettig, the group’s executive director, said in a statement. “Felony disenfranchisement is just the latest in a long line of attempts to restrict ballot access, just like poll taxes, literacy tests and property requirements were used in the past.”

The impact of these state-level bans, which are on the books in 48 states across the country, varies significantly depending on where someone lives.

According to the Sentencing Project, state-level disenfranchisement rates range from 0.15% in Massachusetts to more than 8% in Alabama, Mississippi and Tennessee. In Vermont and Maine (along with Washington, D.C.), none of the population is disenfranchised because those jurisdictions allow people in prison to vote.

Currently, 11 states deny voting rights to people after they finish their full sentences, including parole and probation.

Overall, the number of Americans disenfranchised due to a felony conviction has been dropping in recent years. Since 2016, that number has declined by 24% “as more states enacted policies to curtail this practice and state prison populations declined modestly,” according to the new research.