MILWAUKEE — State Senator Lena Taylor and Secretary of the Department of Corrections Kevin Carr hosted a public information meeting on Wednesday to discuss the proposed site for a facility to replace Lincoln Hills.

Lincoln Hills is a juvenile prison in Irma, Wisconsin. The proposed location for the new facility is at 7930 W. Clinton Ave. in Milwaukee.

Dante Cottingham spent a year at Lincoln Hills in the ’90s. He spoke at the meeting about the importance of opening up a facility in the Milwaukee area from his perspective. He also shared his perspective with TMJ4 beforehand. 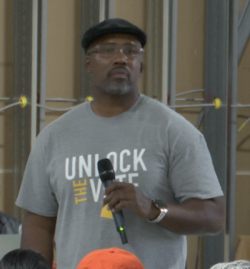 Dante Cottingham was sentenced to a year at Lincoln Hills for battery. He was just 14 years old.

Cottingham was sentenced to a year at Lincoln Hills for battery. He was just 14 years old.

“First thing you notice is that… the drive is hours and hours away,” he said.

Cottingham was living in Racine at the time, which is a nearly four-hour drive to Lincoln Hills in Irma.

“I was in there one year and I saw my mother one time for like 45 minutes because the drive is so far. They got jobs, they have to work, they have bills to pay. They couldn’t come. And you internalize that, you feel that, that means something, that resonates with you,” Cottingham said.

He said he also spent time in solitary confinement while at the youth prison. Solitary confinement of juveniles can lead to depression, anxiety, and psychosis, according to the American Academy of Child and Adolescent Psychiatry.

At that time in his life, Cottingham said what he needed most were connection and correction. Neither of which he got. He believes that ultimately led him to adult prison two years after his release from Lincoln Hills. He was sentenced to life at age 17 but was able to get out after about 26 years. He now works with Ex-incarcerated People Organizing (EXPO) and is a certified Peer Support Specialist.

“At a time when I needed to connect, it was the time when connection was the furthest possibility because of the demographics,” Cottingham said. “I needed connection with somebody that looked like me, talked like me, that understood me.”

From his own experience at the facility in the 90s and from hearing the experiences and allegations of abuse from young people who have recently served time at the facility, Cottingham said building a facility in Milwaukee is crucial “to not make them feel like they’re being discarded, not make them feel like they’re being thrown away, and part of that involves keeping them close to their family.”