From NPR, All Things Considered, August 20, 2022
Interview by Sarah Betancourt of WGBH of Carlos Morales

There are few rules about heat in the nation’s prison cells. As temperatures rise, advocates say the situation is becoming more and more dangerous.

MICHEL MARTIN, HOST: For correctional facilities that remain open, extreme heat is a major challenge. That’s because many of these facilities are old and lack air conditioning, exposing prisoners to dangerous temperatures. Sarah Betancourt from member station WGBH tells us that with the exception of some county jails and federal medical units, there are few rules for maximum temperatures in cells.

SARAH BETANCOURT, BYLINE: It’s a problem that isn’t exclusive to the South as climate change pushes more hot days on northern states. The issue is urgent in Massachusetts because there are no regulations capping the temperatures in the state’s prisons, and people inside are wilting in the heat. Carlos Morales was released from prison last June and now works in prison advocacy. He remembers asking to leave a small food slot open to get a cross breeze. 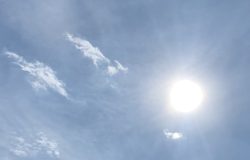 As the sun beats down, there are few rules to address the inhumanely hot conditions inside prisons.

CARLOS MORALES: Our COs typically were cool enough to let us leave them open, but then the officers in charge would close them. And there were times where I would actually sit at the trapdoor just to be able to cool off because the fan is just blowing hot air.

BETANCOURT: Those fans are expensive, and they’re only eight inches wide. At Bridgewater State Hospital, the state’s facility for men suffering from mental illness, there are no air conditioners in patient rooms. Harry, a parent of a patient there, is worried about his son. He didn’t want his last name used out of concerns of retaliation.

HARRY: When I went out today, I purposely shut off my air conditioner, went out for about an hour before this meeting, came back in, and I did that to – just to see how my son was feeling. And I’m like, oh my gosh. That’s brutal. And he’s locked up in this little cage, literally a 6-by-8 cage. Imagine.

BETANCOURT: Parents have been meeting with the department of correction and health provider Wellpath to see what can be done. A Wellpath email to parents shown to NPR says Bridgewater staff shepherd patients into a cooler gym occasionally during the day. The DOC refused to provide anyone to comment, despite repeated requests. On a 95-degree August day, a group of Massachusetts legislators, including Senator Jamie Eldridge, heeded constituent complaints and toured the facility to ask how heat is addressed.

JAMIE ELDRIDGE: The term that the DOC uses is conditioned air, so it’s not air conditioned. What that means is that they have fans in the hallways, and then they do have some cold air that blows in from the outside. But it does not address the moisture, and there’s not air conditioners in each cell.

BETANCOURT: Legislators were told the electrical system couldn’t support air conditioners in the cellblocks because it’s too old. Most of the 13,000 prisoners in Massachusetts aren’t in air-conditioned cells. Mike Wessler is with national nonprofit Prison Policy Initiative. He says heat exhaustion can be fatal for prisoners.

MIKE WESSLER: Conditions like diabetes and obesity at higher rates that put them at particular risk of heat exhaustion because they can’t regulate their body temperatures as well. We also know that people behind bars often have higher rates of mental illness and are often on medications for that that make it dangerous for them to experience extreme heat.

BETANCOURT: Prison Policy Initiative has been keeping track of whether prisons have air conditioning and what happens when they don’t. The answer to extreme heat from authorities nationwide seems the same – an extra shower and cooler communal areas during the day. That’s not enough for advocates. Jesse White at Prisoners’ Legal Services in Massachusetts says temperature regulations need to be put in place.

JESSE WHITE: Statewide baseline humane standards on this that would cover a maximum allowable temperature, you know, across the state inside of our prison system and then also some basic humane provision to allow for people to not get sick.

BETANCOURT: With extreme heat becoming more common and few rules to limit temperatures in cells, prisoners are left to fend for themselves with popsicles, fans and ice water. For NPR News, I’m Sarah Betancourt in Boston.