Dressed in a royal blue graduation robe, Roberto Juarez-Nieves joyfully threw his cap into the air this month at Oregon’s Oakhill Correctional Institution. After completing five months of electrical maintenance courses, he had at last received his technical diploma from Madison College. 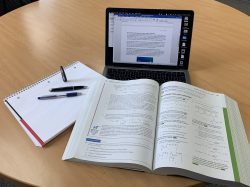 The tools students use in higher education courses

Upon getting released early from prison next year, he hopes to start working toward his bachelor’s degree in political science. His ultimate goal is to provide for and be a role model to his three children.

“I have to be able to show my kids that, even though I was in here, I still was able to go to school, to get a career, to come home and do something great with myself,” he said. “I can take everything that I’ve learned here to better myself when I get out.”

Educational opportunities can be a game-changer for the thousands of people who arrive every year to Wisconsin prisons, said Jamie Reinart, an education and program training liaison at Madison College.

In partnership with the state’s technical colleges, the DOC offers vocational programs at 18 correctional institutions. By the end of their coursework, students walk away with a technical diploma and job certification in one of 23 job fields.

According to Ben Jones, DOC education director, those training opportunities are in high demand. About 1,400 of the state’s nearly 20,000 prisoners are enrolled in vocational programs. Another 8,000 people are on the waitlist.

Meanwhile, other post-secondary opportunities are growing in state prisons. Though Milwaukee Area Technical College is one of the only schools to offer an associate’s degree program in state correctional institutions, Reinart said Madison College will soon offer one of its own by this spring.

In addition, in collaboration with UW-Madison and four other campuses, the UW System will also soon offer incarcerated students a pathway to a bachelor’s degree through its Prison Education Initiative. Last December, the program received a $5.7 million grant from Gov. Tony Evers and the Wisconsin Economic Development Corp.

The expanded offerings in Wisconsin prisons come at an opportune time. Correctional education is garnering bipartisan support nationwide. And after a 26-year ban, in 2020 Congress approved the reinstatement of Pell Grant eligibility, starting July 1, 2023.

For Robert Taliaferro, taking courses in prison proved that his mind was not locked up, even though his body was. “I wasn’t a dummy,” the 67-year-old said. “I just did dumb things.”

At Minnesota Correctional Facility in Stillwater, where he was sent due to overcrowding at Wisconsin’s facilities, he enrolled in several college courses. From 1985 to 1989, he edited the facility’s newspaper, The Prison Mirror.

After returning to Wisconsin to the Oakhill Correctional Institution, Taliaferro persuaded Odyssey Beyond Bars to accept him into the English 100 course last year despite his already extensive writing experience. The opportunity showed him the power of education in changing prisoners’ perspectives.

“You’d see light bulbs start popping up in their heads — all over the place. You’d see their eyes light up,” he recalled. “They were getting rewarded for their content and realizing that they’re good enough.”