We all want to be seen – to be valued for who we are and what we can do. But those who have been incarcerated are often denied that basic privilege. When we are inside, we are known by our last names or, even worse, as a number. And when we are released, we are often still only known by our worst mistake rather than by what we are capable of accomplishing in our communities.

However, on Monday night July 26th, one of EXPO’s own had the opportunity to be seen by one of the most powerful individuals in our state. Marianne Oleson, the Executive Assistant to the Directors, attended an open house at the Governor’s Executive Residence in Madison, WI. The event was attended by individuals representing non-profits from across the state, and Marianne was there proudly representing tens of thousands of currently and formerly incarcerated men and women in Wisconsin. 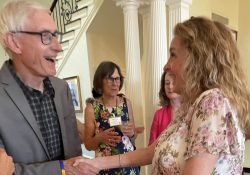 After a chance encounter with the Governor’s Chief of Staff at the event, Marianne was escorted to meet the Governor Tony Evers and his wife. In speaking with them, she was able to use her powerful voice to share her story of felony disenfranchisement. Like approximately 45,000 people in our state with felony convictions, Marianne remains unable to vote until 2040 despite having completed her prison sentence over 5 years ago. She pays taxes and has been released to the community as a “productive citizen” and yet she cannot vote for who will represent her needs and interests in local, state, or federal elections. Her inability to vote leaves her feeling disconnected from her political leaders.

“I don’t have any say or value in their choices that affect me. When you have the right to vote, it may not feel like much, but it’s everything. They have to listen to you, acknowledge you. But I’m nothing to them. Literally. Just space. I’m a cardboard cutout in front of candidates and the elected.”

However, at the event at the Governor’s Mansion, Marianne was seen, valued, and respected. As the most powerful man in our state listened to her story, he said he was glad she was there. And his response was to agree that there is work to be done in our community.

In reflecting on the evening, Marianne shared how she would not have had the courage to even walk up the driveway had she not been carrying inside her the experience, expertise, wisdom, and successes of EXPO. When she was incarcerated at TCI or REECC, Marianne could not have imagined being at the governor’s house, much less talking with him about the rights of those who have been incarcerated. EXPO reminds her of her power and gives her the strength to recognize her own worth.

But it is not enough that one member of EXPO was heard for five minutes on one night by one man, however powerful he is in our state. Everyone, regardless of their conviction status, is worthy of being seen and heard. We all have value, we all have wisdom. We are ready to share it.