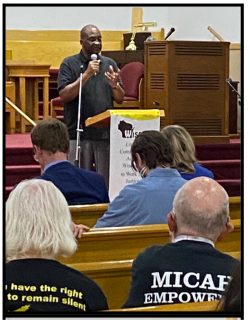 And yet, current laws in Wisconsin prevent people who have been released from prison after completing their sentence for a felony conviction from voting while they are still “on paper.” These laws mean that, despite the fact that these citizens pay taxes and contribute to their communities, those who are on felony probation, parole, or community supervision cannot vote in our state.

On Thursday, July 21, EXPO, FREE, WISDOM, and Gamaliel held a US Senate candidate forum at the Mt. Zion Missionary Baptist Church in Milwaukee to bring to light this and other instances of dehumanization in our community. The evening included testimonies from people who used their own lived experiences to speak truth to power.

First, EXPO/FREE members shared their stories of not being eligible to vote for 10, 20, 30 years, or even for the duration of their lives, even after their release from prison. Dante Cottingham, EXPO fellow from Racine/Kenosha, showed us the consequences of having no voice. “We can’t leverage our vote for policies that impact us, that impact our families, that impact our children, and that impact our communities.” While he spoke the audience chanted, “That ain’t right!”

Second, members of the Racine Interfaith Community (RIC) shared their experiences with the unjust and inhumane immigration system in our country that separates families and places impossible hurdles on the path to citizenship. Finally, the leaders of EXPO and FREE talked about the need to divert funds from incarceration to community programs that support – rather than hinder – healing and restoration. Tamra Oman, statewide program director for FREE pointed out how we do not treat the issues of addiction and mental health but instead choose to incarcerate those affected by them.  She called on candidates to invest in “public wellness instead of public safety.”

Each candidate answered “Yes” to all of our asks. Further, although not in attendance, Democratic candidate Alex Lasry relayed three “Yes’s” via email. Republican Senator Ron Johnson did not attend or provide answers to the questions.

These are issues of life and death for our community and we are excited to know we have the support of the candidates who attended the event. As Carl Fields, EXPO organizer for the Racine/Kenosha area, said at the start of the night. “This is about quality of life, dignity, and respect for all.”