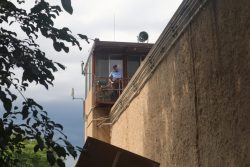 Myriad factors are fueling staffing shortages within correctional facilities, as Wisconsin Examiner recently reported. These include working conditions faced by many jail and prison staff and  mass incarceration, which has far outpaced the hiring of new staff.

Vacancy rates across the Department of Corrections (DOC) vary, with facilities like Waupun Correctional Institution running upwards to 40% vacancy rates for staff overall. The DOC, however, does not include local jails which are under the jurisdiction of county governments. Daley notes that other public safety jobs like police and fire did not see their collective bargaining rights weakened in the same way. “Do those units [jobs] have similar vacancy rates? They sure don’t,” he adds.

“Restoration of worker voices through the freedom to collectively bargain is what hasn’t been tried since the trend began,” he says. “The current governor did put collective bargaining into his first budget which was removed on partisan lines. Perhaps politics is more important to some than meaningfully attempting to fix an overbearing problem.”

Some have also pointed to the very design and age of many prisons in the state as a contributing factor. In Wisconsin, some of the oldest prisons are also some of the largest, and can be inefficiently designed. Daley, however, isn’t so sure that’s a big part of the problem. The prisons in Waupun and Green Bay are both large, old facilities, he points out, but, he says,  “they’re not necessarily unique in being significantly short-staffed.”

These staff shortages create further hardship due to a lack of care and needed treatment programs for system impacted people.