EXPO/FREE hosted a powerful viewing of When Claude Got Shot followed by a panel discussion moderated by Tamra Oman.

Watch the video of the discussion here 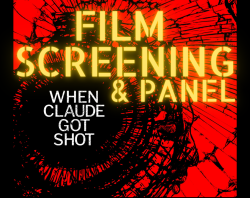 Screening with Discussion Panel: When Claude Got Shot

Claude Motley thought he’d beaten the odds: a business owner who moved his family from the violence of Milwaukee to the suburbs of Charlotte. Yet there he is on a trip home for a high school reunion: black male victim, 43, shot in the face during a carjacking. Two nights later, Claude’s assailant tries to rob nurse Victoria Davison, but she has a gun and shoots him during the struggle. A rush of guilt overcomes her as she overhears the paramedics – the boy she shot, Nathan King, is only 15 years old. Nathan’s parents are devastated. They’ve done all the right things, including sending their son to a highly ranked suburban school. Now he’s charged with multiple crimes, and, worse yet, he’s paralyzed waist down. In a single weekend, three African-American families confront a harsh reality: there’s no escape from gun violence. Our film follows how each of their lives have changed and the implications their stories have for our society’s struggle to overcome gun violence.

—Jamie Schutz
Thank you to all who shared. EXPO Ex-incarcerated People Organizing