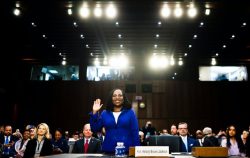 She can help restore America’s trust in the judicial branch.

Americans should universally celebrate Judge Ketanji Brown Jackson’s appointment to the U.S. Supreme Court, but many do not. I will endeavor to remedy this mistake by showing that under any objective standard Jackson is qualified to serve. Further, speaking from personal experience, I will explain why she will bring something special to the court.

Much about Jackson’s confirmation process was troubling, particularly the behavior of several Republican senators who badly tarnished the body’s reputation. They squandered the right to call themselves members of the world’s greatest deliberative body.

These senators were nasty and vitriolic and childishly walked out when Jackson’s confirmation vote was announced.

Early in life, we learn good behavior, proper manners and civility from our parents, at Sunday school and in classrooms. These senators appear to have forgotten these lessons, showing why there has been a decline in civility across American society.

Ironically this mistreatment will make Jackson a better justice. She will better understand the challenges she faces as she fulfills her obligation to serve our country as a whole. She will take our motto — e pluribus unum (out of many, one) — contrast it to the senators’ behavior and pledge that “I will never, ever be like that.”

Benjamin Franklin experienced something similar (as dramatized in Ken Burns’ recently aired PBS documentary about Franklin’s life). Franklin stood before the British Privy Council in 1774 and endured its abuse. Franklin had entered that chamber as a loyal Briton; he left it as an American and became one of the new nation’s founders.

Like Franklin, Jackson endured abuse with composure and eloquence. She entered the Senate hearing room as a nominee and left having earned America’s confidence and respect, a person ready to be a justice for our time.