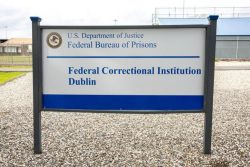 WASHINGTON (AP) — A government watchdog has found a “substantial likelihood” the federal Bureau of Prisons committed wrongdoing when it ignored complaints and failed to address asbestos and mold contamination at a federal women’s prison in California that has already been under scrutiny for rampant sexual abuse of inmates.

The U.S. Office of Special Counsel now wants Attorney General Merrick Garland to step in to investigate the allegations after multiple whistleblower complaints were filed earlier this year. The office detailed its findings in a letter this past week and has asked Garland to submit a report within 60 days.

The whistleblower complaints, filed by union officials at the Federal Correctional Institution in Dublin, California, alleged that senior Bureau of Prisons officials had failed to act to resolve the allegations of workplace contamination. The union had repeatedly complained that correctional officers and other prison workers and inmates were being exposed to potentially hazardous mold and asbestos but says those concerns were ignored.